Ultrasounds, sometimes referred to as sonograms, are a medical test which uses high-frequency sound waves to produce a picture of the organs in the body. In the case of pregnancy, ultrasounds are routinely prescribed to produce an image of the fetus. A 4D ultrasound uses a special sonogram machine and takes images from a few different angles, which reveal more detailed images of the fetus, such as facial features. It can also capture movements made by the baby during the procedure. 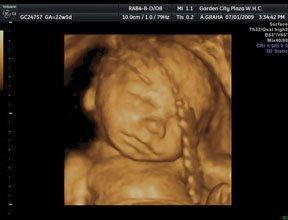 A standard ultrasound only provides a two-dimensional image of the fetus. They are usually ordered in pregnancy for a variety of reasons, such as evaluating the development of the baby, determining gestational age and identifying any abnormalities. Although the standard ultrasound produces a picture of the fetus, it may take a trained sonographer or a doctor to identify features and body parts. Keepsake photos are given to the patient, however, they are often grainy.

Occasionally, a two-dimensional ultrasound may indicate a problem and a more sophisticated 4D ultrasound is needed to confirm an abnormality. For many pregnant women, there is no medical need for a 4D ultrasound, however, the mom-to-be wants to get a better look at her baby. Most centers that perform a 4D ultrasound, recommend the test is performed after twenty-five weeks gestation. The baby is usually big enough to see features clearly.

Standard ultrasounds are ordered by a physician and performed at a clinic, doctors office or at an ultrasound imaging center. 4D ultrasounds do not require a doctor's order and are often done at a private ultrasound business, which specializes in keepsake 4D ultrasounds. The procedure is non-invasive and takes about twenty minutes to complete.

After a conductive gel is applied to the abdomen, the procedure is done by gliding a transducer over the pregnant women’s abdomen. A monitor is within view, allowing the woman to view the fetus and watch as the ultrasound is completed. The mom is given a keepsake photo and video of the baby.

The Federal Drug Administration regulates the level of energy used in ultrasound machines. Although they are considered safe, many physicians believe medically unnecessary ultrasounds should be avoided. This has caused some debate regarding elective 4D ultrasounds.

Because 4D machines create a higher quality image, there is some concern by physicians that the energy level used in 4D ultrasounds may be higher, although this has not been proven. For women who do want a keepsake photo and opt for a 4D ultrasound, it’s important to be sure the technician performing the test is a licensed sonographer. Women considering a 4D ultrasound should talk to their doctor regarding any safety concerns prior to the procedure.